GIVE HER A BREAK.

I'm not sure how old this interview is, but in this interview she was not only getting verbally attacked by the host, but callers weren't bein nice either. They kept tellin her it was a Rihanna-Beyonce world and that she had no talent ect. Listen to the interview at the link below.

Now, I can't tell people not to voice their opinions, but come on now. You shouldn't tell the chick shit she's already heard a million times in one interview. It's not even that necessary. 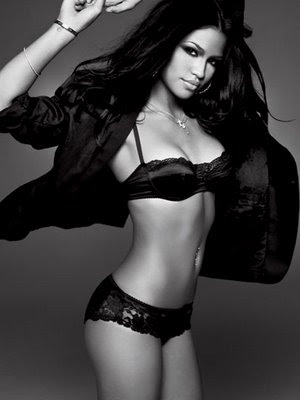 You might think she can't sing or whatever, but she's doin her thing. She's keepin her head up even with all the shit she's goin through. She had nudes on the net and she's still grindin like it's whatever. I love her style. I think she's a very pretty girl. I do think that she should try her talents elsewhere then singing, but what can you do. She's gotta learn herself.

She's a dumbass and trend whore. I think it's good people voice to her how out of place she is in the music industry. The more you let talentless hags such as herself breeze through with wack singles and worthless videos, the more they put out. I will agree that she's very pretty. But even so.. stick to fucking modeling.

I dunno.. I've seen her twitter and blogs and her personality seems to really suck. But that's based solely on what I've seen so it's probably not worth much. In any event, I'm obviously not very fond of her lol She's part of why I've been turned off to R&B lately. Her and old ass wack ass diddy and his never ending boy/girl bands.

omg, look in my older posts for one about cassie
we have the exact same views on her!

eh, she is a fly girl but she does too much in my opinion.

yeah im not a fan at all but i agree with you 100% here. every single word. lol. but people are just going to hate. nobody has anything better to do. Love or hate. either way it is just an obsession. Why waste time thinking about how much you hate her when you could just ignore her existence? (not in a mean way...just the whole...who cares kinda way) She is doin her thing though... But some ppls just need to stop focusing on what others are doin with their lives and do something with their own. i had to tell some ppl that in one of my classes one time..it got so annoying when they always had a comment on what i was wearing or a bag i was rockin...and one girl actually got mad at me LOL

and yeah i agree with the person on the first comment about wack ass diddy and his never ending bands >.> he just really needs to sit down... i mean im surprised he still has cassie and day 26. dude can never keep an artist. he's always droppin em man. signin with bad boy is like signin your ticket to failure in the music industry anyway. dag i thought at least danity kane was gonna do somethin but he broke them up too....