It's funny where you meet people. Twitter is the last place that I thought I would meet someone who has drive like this dude. I first met Chris and he was roastin and actin goofy on Twitter. I didn't know much about him at all until I added him to my BBM. He told me about soccer and this is what he had to say... 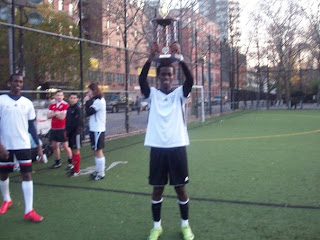 "It all started from kicking a around a plastic bottle filled with dirt, playing wit coconuts, from a tennis ball and then to an actual soccer ball..for most of you who are wondering who I am ..well stop wondering. Hi my name is Christopher Wade Martin-Schloss, im 18 years of age and i reside in Brooklyn Ny. Im a young talented soccer player with alot of room for more development so you do the math . I started taking the sport seriously at the age of 12/13 when I was encouraged by some of my follow classmates and friends when they used to watch me play soccer at recess at the high school I went to. So afer i was encouraged for months I decided to get serious and join a team all this happened when I use to reside in barbados..( p.s i wasnt born there i was educated there and lived there the better part of my life) but anyhow when i decided to join a team i joined one of the most famous youth clubs in barbados and it goes by the name of "Barbados Soccer Accademy" . It wasnt a bad club but its full of favorites and the team had no chemistry so their consistency was off and on. I always used to go to alot of training sessions worked hard and never got playing time they always used to bench me. Other players would laugh and discouarge me etc but i didnt care because it made me a better person and player ..i took it as constructive critism.
while on the other hand some would tell me not to give up .but after joining the club i got to played three matches before the season finished but i had already made up my mind i would transfer so when the coach saw me played and scored goals he was amazed but word got to him i was already leaving the club so he was trying his hest to keep me there etc. after that season I transferred to a club in my community called "Gall Hill" where the coach was like a family member to us and he helped me step my game up where the club was small but was sucessful. After one season with them i started another season but i left in the middle of it because it was time for me to move back to america and try to further my knowledge and career with soccer. and former players from the other club started disliking me and telling me I wont make it and a whole bunch of garbage.when i came my mother had already looked up for a team and everything so once i got here and settled in I can proceed with the club. So I came got invovled with the club etc and happened to build a chemistry with the coaches and players. first time I played with them we won some tournaments and lost some but at the end of the day everythin was acceptable.So as i grew into the club i gained leadership skills and more playing skills which made me the team captain .so being appointed as team captain i gained more confidence and took the sport to a next level. Couple months ago i met with a guy i wont disclose his name. but he has manged me helped me getting into colleges and trials with pro teams etc. when those former teammates got the word im making progress they all tryna be on my good side and start praising me up so i can help them out but it int happening .
in the summer im set to go trials for 3 professional teams but i won disclose where either . but hopefully if i dont make the teams where im set to go trials i would just settle for college soccer and i would love to disclose the name of the college thats intrested in me but i cant sorry folks. (p.s if i made pro i would of still gone to college but just to study) but basically thats how its all started and hopefully when I do make progress in my career I hope I can be able to blog here again .But if theres anything you would like to find out I out my social sites info below ....
yoou may want to follow me on twitter lol you wont regret it "


Chris has ambition and drive like I've never seen in someone before. I wish him the best in whatever he does.

thats whats up young man!! im proud of ya!! positivity is always the best!!godbless you boo and keep shining!!much love, tawannaAKA mzbsf73

thats whats up young man!! im proud of ya!! positivity is always the best!!godbless you boo and keep shining!!much love, tawannaAKA mzbsf73